One girl can make a difference…

Moscow has burned nearly to the ground, leaving its people searching for answers – and someone to hold accountable. Vasya finds herself on her own, amid a rabid mob that calls for her death, blaming her witchery for their misfortune.

Then a vengeful demon returns, renewed and stronger than ever, determined to spread chaos in his wake and never be chained again. Enlisting the hateful priest Konstantin as his servant, turmoil plagues the Muscovites and the magical creatures alike, and all find their fates resting on the shoulders of Vasya.

With an uncertain destiny ahead of her, Vasya learns surprising truths of her past as she desperately tries to save Russia, Morozko, and the magical world she treasures. But she may not be able to save them all…

“I have plucked snowdrops at Midwinter, died at my own choosing, and wept for a nightingale. Now I am beyond prophecy.”

I was really hoping The Winter of the Witch would redeem The Girl in the Tower for me, and make it all better. While I enjoyed this book better in the end than I did the previous, I still can’t say I loved it. I worry what my friends will think because what I feel is so completely the opposite of everyone else I know.

The are two halves to The Winter of the Witch. The first half is Vasya learning how to do magic. It was interesting and I’m glad to finally know a lot of what was finally revealed in this book. But it was ultimately a setup for the second half. It was a means to an end and not actually an exploration of what could be. She also learned about her family during this time, which has been hinted at for the past two books. Ultimately, I ended up not enjoying this part as much as I could have.

The second half of the book was the war between the Rus and the Tartars. The entire series was building up to this. It felt like a lot of okay buildup with an ultimately disappointing conclusion. In the end I didn’t care about the conclusion. The ending was no surprise because throughout the entire series, basically every choice was narrowed to this one ending. That I didn’t particularly care for.

I felt that things didn’t fit. Most of the series up until this point was Vasya being Vasya: headstrong, not like others, magical but not really in the know, and in the middle of things she probably really didn’t need to be in the middle of. And then the end of the series was a war between two peoples that honestly I didn’t feel connected to. I didn’t care about the Rus, who treated Vasya like shit the entire time. I didn’t care about or even know much about the Tartars who were coming to attack the Rus for not holding up to a bargain. And it all rested, somehow, on Vasya’s shoulders? Nah I don’t like that.

My biggest problem with the book is that it basically the culmination of one of my least favourite tropes: “You’re stupid because you didn’t know this thing that no one taught you! Oh and also, it can’t be taught, you have to learn it yourself!” Yeah…How about you fuck off? Every single person in this series fails Vasya every step of the way. They never teach her anything, and then she runs off and gets into trouble because of her stupid decisions that really I feel like she should have seen coming by now after the last 20 bad decisions she made, most of which ended up really poorly for her and/or those around her.

Also the male ‘romantic’ lead doesn’t have any trust in her and constantly doubts her. Constantly is pushing her away, yet uses her every step of the journey, too. Trying to make decisions for her, while also giving her a lot of time and distance to make her own choices. It sounds like a contradiction but in the end I just felt like he used her the entire series. It was ultimately her choice but honestly I’m not happy with it.

The bright spot in all of the book was the history, which is not something I have really come across much prior to this series. It was interesting, but sort of consumed by the rest of the things I didn’t really enjoy. There wasn’t much focus on it at all, which was frustrating at times because that was one of the things the series ended up ultimately being about.

I don’t know, I just didn’t care for this series, and this book was no exception. 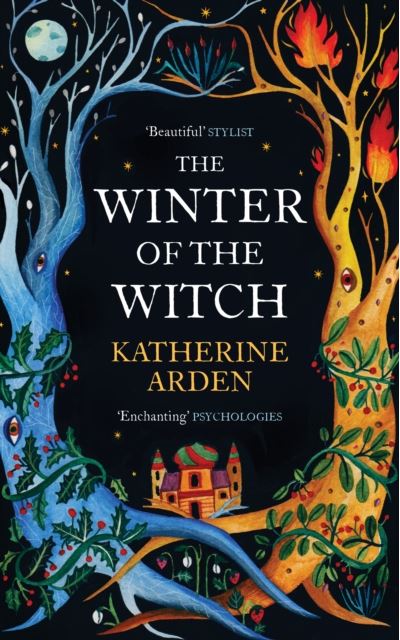 One thought on “The Winter of the Witch by Katherine Arden, book three of the Winternight trilogy. 3 ¼ stars.”