In this spirited sequel, The Rook returns to clinch an alliance between deadly rivals and avert epic—and slimy—supernatural war.

When secret organizations are forced to merge after years of enmity and bloodshed, only one person has the fearsome powers—and the bureaucratic finesse—to get the job done. Facing her greatest challenge yet, Rook Myfanwy Thomas must broker a deal between two bitter adversaries:

But as bizarre attacks sweep London, threatening to sabotage negotiations, old hatreds flare. Surrounded by spies, only the Rook and two women, who absolutely hate each other, can seek out the culprits before they trigger a devastating otherworldly war.

STILETTO is a novel of preternatural diplomacy, paranoia, and snide remarks.

“It’s the Estella principle. If you take a child and teach it to hate and fear something from before it can understand language, it will be supremely difficult for the child to overcome that.”

Stiletto picks up after the events of The Rook, with mostly a new set of characters. At the end of the previous book, a second secret society called The Grafters, who The Checquy quarreled with centuries prior and now regard as their boogeymen, were just starting their journey to becoming allies with The Checquy. Stiletto is that journey.

The primary character this time around is Odette, a grafter young adult. She is mourning the loss of her friends shortly before this book started. However, Odette is very competent at what she knows and her specialty. While also being a force of absolute chaos. Everything she does seems to make things worse for her or others. It is amazing.

There were other characters, too. Like the bodyguard they put on Odette when she proved to be chaos incarnate. Under no circumstances does Felicity want there to be more trouble, because that will reflect poorly on her and she doesn’t want her position in the organization to get stalled because of this Grafter. We also see a bit of Rook Myfanwy Thomas, who is in charge of this new alliance, on the Checquy side. Though these characters kind of thread their stories throughout the book, until you realize why they’re doing what they’re doing.

Like the previous book, Stiletto has a lot of random asides. Short stories placed within the text, mostly for worldbuilding and getting to know the characters. Last time they were powerful, and they all tied into something or another. This time they were just funny things the Checquy came across, or interesting problems they had in the past. Some explained the Checquy, some went into the history of the Grafters. However while they were at times interesting, I just didn’t feel like they had the power they had the previous time around. They felt like they were added to keep the same style of writing between the two books.

There are two main problems Stiletto deals with. The first is the problem of allying the Checquy and the Grafters. Centuries of animosity and building the other as terrible monsters has gotten in the way of treating each other like humans. The Grafters are falling in line, because leadership said so. The Checquy are having problems adapting to the idea of sharing the same space with monsters, as they see it.

The second problem is that there is a dark force working its way through Britain. It is killing people. And the resulting bodies aren’t pretty. And they’re threatening the secrecy. But the Grafters know who, or what, is behind this problem. But they want to deal with it themselves, without letting the Checquy know there even is a problem (though of course they know). Because they don’t want to ruin the burgeoning alliance.

I didn’t hate this book by any means. I just don’t think it was as powerful as the previous book. Stiletto tried to replicate what the Rook did, with varying degrees of effectiveness. Despite harping on the side stories, those were probably my favourite part of the book. Because I wasn’t all that interested in Odette the force for Chaos and the Grafter mystery that shouldn’t be. Though the scene where Odette climbed into a giant sea monster’s blowhole was quite entertaining.

I know at least part of Stiletto was supposed to be a spectacular reveal but I’m not exactly certain what parts. It had the feel like I was supposed to gasp somewhere, but I didn’t. I instead felt like everything was introduced in a very logical, well laid manner so you can figure everything out gradually. Very interesting feeling. 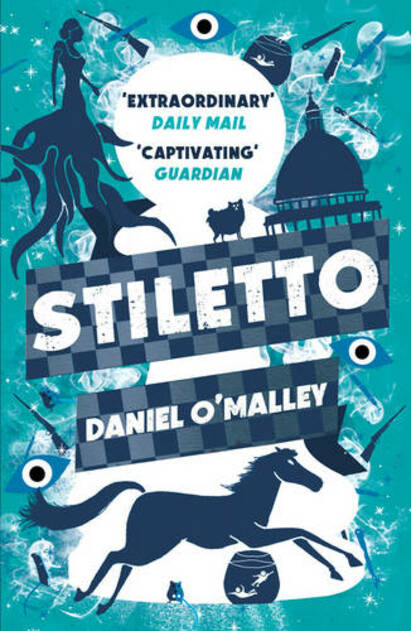 3 thoughts on “Stiletto by Daniel O’Malley, book two of The Checquy Files.”