When I first started this series of Genre and Subgenre posts, I thought I knew a lot. Very quickly this illusion was broken when I was reading the Wikipedia page on Speculative fiction and saw that Horror was a part of spec fic.

Yet I never considered for a moment before reading this that Horror itself was speculative fiction. I thought horror combined sometimes with sci-fi or fantasy to create a subgenre, but not that the genre itself was considered spec fic.

But why? Why did I think this way? Well, let’s see if I can figure out why.

How is Horror Speculative Fiction?

Speculative Fiction itself deals with the question of “What if?”. But more than that, Spec Fic deals in a level of reality divorced from our own. What if the world wasn’t this world but another. What if this person wasn’t human. What if we had magic. As Annie Neugebauer puts it: “Speculative fiction is fiction in which the author speculates upon the results of changing what’s real or possible, not how a character would react to a certain event, etc.”

And Horror deals with what ifs. Horror aims to frighten or unsettle. Sometimes it does it with reality, things that are actually possible like murder. But sometimes it also uses speculative elements to tell its story. Whether it is body modification or supernatural creatures. This is where the speculative fiction part comes in.

An article by Felipe Wasserstein titled “The Evolution of Horror in Fiction: a Brief Guide” surmises that Horror as a genre changes to meet the fears of the day. Over time the fears shifted towards science and other more modern fears, such as mental illness. But the speculative monster fears still exist.

And perhaps this is where my disconnect with Horror being Speculative fiction occurs. I do not find vampires scary.  When I think of horror, I think of other subgenres, the ones that can actually happen to me. The horror with murder and torture. In part because that is what I have been primed to believe as horror. When I was growing up, the Saw movies were the Big Thing. That was Horror.

Only there is more to horror than that. I just forgot the rest. Simple Film Reviews updated a really good chart that was originally made by Horror on Screen (neither of which seem to exist anymore), which I found on the AV Club website. While for film, there is obviously a lot of crossover with books as well. 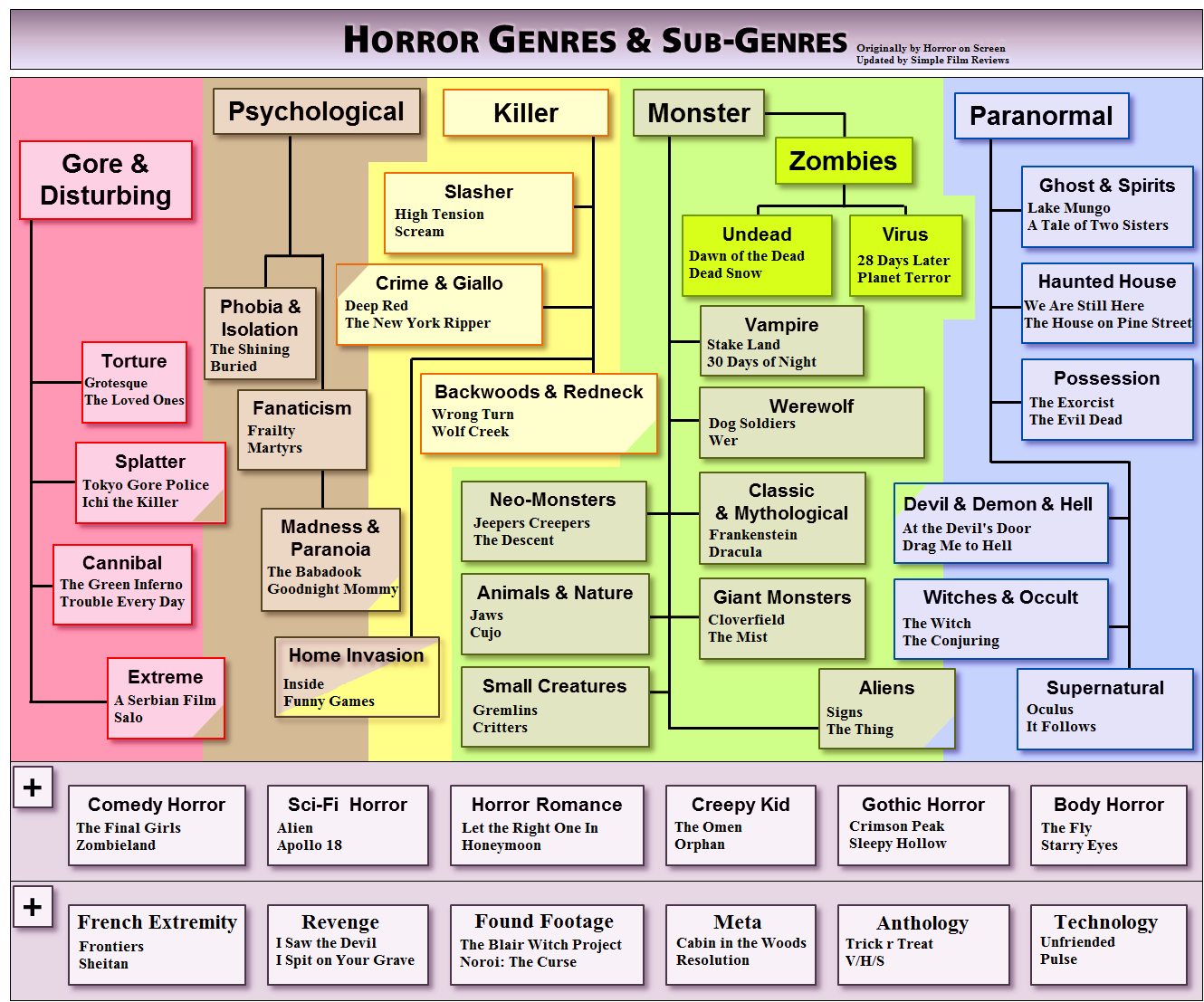 Question, perhaps silly given the topic at hand: What genre is Interview with the Vampire?

If you’re like me, you might think it is fantasy, because it is a vampire love story, right? (You can’t argue with me because Louis is in love with his self-hatred and you have no argument against that.) You may think that it was back-labelled as urban fantasy after the urban fantasy genre took off during the 90s. But you may not have given it a lot of thought because it’s awesome and who cares.

When it was first released, it was released as a gothic horror novel – a label that hasn’t lost its grip on the novel. Even now, horror and fantasy are both top contenders for the genre on Goodreads, which is based on what people shelve books as more than anything official. The perception of the book is still one of horror. Yet I don’t think of it as such.

And this is just one example of many I can think of where my expectations for what it is differs from what it is in reality in regards to horror. And part of the problem is because they aren’t advertised as horror. I certainly never knew Interview with the Vampire was until I looked the book up on another matter about two years ago.

But the fact is, horror is being relabeled, in an attempt to hide from itself. Annie Neugebauer, in another article called “Halloween Haunts 2013: Reclaiming Horror“, outlines the problem very well. In some ways the label “Horror” has become tainted, perhaps by the same bad slasher fics I mentioned thinking horror was above. The label has been discarded in favour of selling a book under different terms, terms that don’t have a stigma. Chunks of the genre are being chipped away by people saying “this is good horror, we’ll keep it, it’s ours”.

And maybe we should bring that label back.